Article by Simon Renwick. Edited and researched by Mike Edwardson.

When people think of days that shook the world, it is, and rightly so, of moments that have shown a genuine impact on humans; human security, human innovation, human impact. But sometimes those things that have shook the world most are those that have sparked something, and have created these aforementioned instances.

One of these days, potentially the most important of these days, in question happened in New Mexico on July 16th, 1945. In an isolated part of the desert, a weapon unlike any before was tested, successfully, and was forever forth to this day cemented as the most destructive capability humans had at their disposal.

The project was dubbed ‘Trinity’, the goal simple: to see whether the findings of the ‘Manhattan Project’, where scientists strived to split the atom, could be used to fuel a bomb; the Atomic Bomb. The bomb was tested successfully, its destructive capabilities were something humanity had never witnessed outside of natural disaster – what had been created was something of great power.
Eye witness accounts implicitly noted disbelief; a man by the name of K. Greisen, an eye-witness of the shot, wrote “Suddenly I felt heat on the side of my head toward the tower, opened my eyes and saw a brilliant yellow-white light all around. The heat and light were as though the sun had just come out with unusual brilliance.”

On the face of it, the ‘Trinity’ test doesn’t immediately seem to be one that shook the foundations of humanity. But what makes this day so important is its aftereffects; Hiroshima, Nagasaki, the Cuban Missile crisis, the Cold War; these are times that, without the ‘Trinity’ test, would have never come into being.

As well as this, there are now nearly 10,000 nuclear weapons that are available for usage by nations across the globe that we know of; the ability for all life on Earth to be wiped out several times over is at the fingertips of a few select people across the globe.
Resultantly, we now live in age where a forever underlying rhetoric will be the capability for complete annihilation at the hands of nuclear weaponry; not many days in human history can boast that they have created a systemic and lasting ‘culture’ of fear that spreads the planet over. This all reverts back to that day in 1945 in New Mexico, where the most deadly militarised weapon to date was tested and given clearance for inclusion in the U.S army’s arsenal. 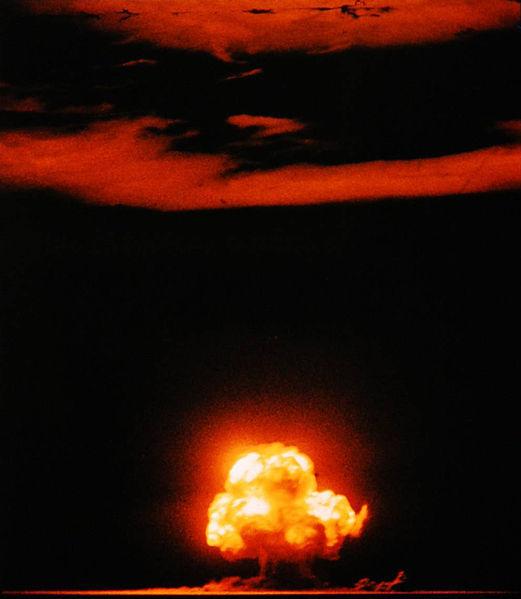 Not only this, but there has also been a huge cultural impact due to nuclear weapons; no one piece of machinery has found such a polarising reception for its capabilities. There are those who vehemently oppose nuclear weapons, most notably throughout the 1970s in the form of the CND, and various other anti-Nuclear weapon groups, yet at the same time we find those who say that nuclear weapons are a timely necessity. ‘Realist’ Scholars in the field of International Relations argue that we’re security driven creatures, and that the nuclear weapon, with its gargantuan capabilities for destruction, provides the perfect deterrent for other countries to fear; the Cold War was essentially a game of deterrence played between the US and USSR, through nuclear weapons.
Finally, we see that nuclear weaponry has been incorporated heavily into media over the past several decades. From John Hershey’s Hiroshima through to the satirical movie Dr. Strangelove or: How I learned to love the bomb, the nuclear capabilities of great powers have been used as inspiration to show the frank and disturbing tendencies of warfare, right through to pseudo-humorous jibes at such a grossly destructive ability.

Many things have shaped many ways we live. The World Wide Web shaped a revolutionary way for us to become more aware of global circumstances and opened up endless possibilities for global communication; the beginning of World War I shaped how we view warfare, and how truly abhorrent its nature can be. However, no one thing aside the Nuclear Weapon has held such real and dire ramifications for the population of Earth as a whole. No one piece of machinery which single heartedly destroys, yet paradoxically ensures safety through deterrence, had before been apparent in human history. No one piece of machinery has been met with such praise for scientific foresight yet simultaneously been vilified as a disgusting feat of human violence. And no one single event as the Trinity bombings signalled so many foreseeable consequences through the mediums of media, literature, social activism and politics.
Truly, when the US military dropped the bomb in New Mexico on that brisk day in August, 1945, they had changed the course of human history; for better, or for worse.