Written by Sam Ellis. With thanks to the National Fairground Archives, Sheffield.

For a long time when I was younger, every summer saw the arrival of the fairground in Tollerton, a village north of York. This was only a small affair: there were always dodgems and waltzers, but that was mostly it for rides. There were a few additional items of the periphery: a food stall and gaming arcade. The showmen would turn up on the village green and assemble their machines over the course of two days. It would last for a similar length of time and then disappear as if it were never there.

However, a little research shows that the showmen’s visit was no passing phase. It is part of a much greater history, one that spans over seven centuries and lasts much longer than a couple of nights.

The arrival of this fairground in particular coincided with the horticultural show. This, like many others in Yorkshire, is a very old tradition. The Village Horticultural Society was granted its charter to hold a summer market by Henry III in 1256. From then on a show occurred every August in one form or another: In the 1600’s it was famous for its horse races, and the village is recorded in Owen’s New Book of Fairs (1802) as having held a market on August 26th for ‘horned cattle, horses, sheep and cheese.’ There is no longer any livestock on display, but there is still a gardener’s competition around that time of year, in which vegetable sizes are fiercely contested. Tollerton is situated on what was once the Great North Road. It would have also been on the edge of the Forest of Galtres. Because of that, the village was often busy: people would stop here and pay a toll to travel. That is quite probably how the village derived its name (prefixing tun, an old English word for Hill.) They could also hire a guide there, as the woods were an ideal place for robbers and highwaymen.

Given this importance on any journey north, it’s not surprising that the annual fair attracted showmen. As a charter fair, the right to host always rests on someone’s shoulders (that person is known as the fair’s Lessee.) Those rights can be bought, sold or auctioned within the jurisdiction of the Showmen’s Guild of Great Britain. There are a number of golden rules, for instance the Lessee cannot miss the fair for more than two years in a row. However, the benefits and exclusivity of being a charter-holder are lucrative.

Thanks to the Showmen’s Guild, the National Fairground Archives in Sheffield and of course help from the showmen themselves, we can track Tollerton Show’s lessee, what they brought and where they went, for most of the twentieth century.

We know for a long time the Charter was held by the Shipley family who would complete a circuit around the North of Yorkshire every summer. They would move down the Vale of York, visit the market towns of Thirsk and Easingwold before arriving at Tollerton. They would then make their way east to the coast, stopping at Kirbymoorside, Staithes and Loftus. Their rides included Swings and Noah’s Arks.

During the 1960’s the rights passed to a showman called Dunwell Johnson, who put stalls up annually, maintaining the charter.  Around the mid 1970’s there emerged a new Lessee, James Watson-Hirst. Originally from West Yorkshire, this was an old showman family, with Lessee rights at many shows and a busy summer schedule. After having visited Illingworth, near Halifax, they would split for a series of smaller events and then regroup. Whilst some showmen went to Tadcaster, James Watson-Hirst would visit Great Ouseburn, Tollerton and Helperby.

The Worlds Fair weekly newspaper regularly reports on these shows, and despite its size, Tollerton does make the occasional appearance. From these despatches we can see what has changed and what has not since the first Hirst fairs in the 1970’s. For instance we know in 1979 there were Dodgems, Waltzers, familiar side stalls, a ‘skint or sick’ Saturday night and a Sunday hiatus due to the nature of the charter, just as there was in the 1990s.  It’s not only the rides that stayed the same, but also the little details: the green on which the show rides were built was sloped and hilly, so boxes and packing were used to even the ground. This was not a few Halcyon summers: it was probably the same for generations. 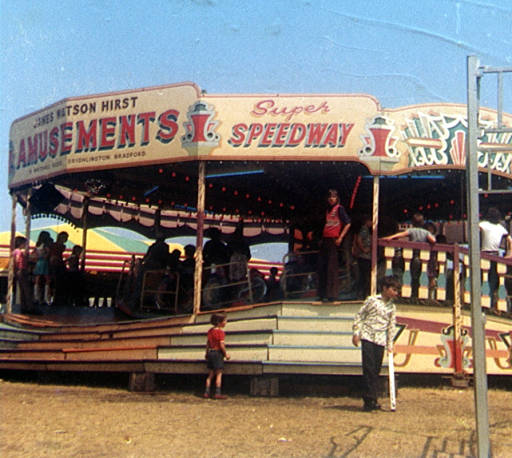 Shortly after the turn of the 21st century, the Horticultural show stopped. This time there was no one like Dunwell Johnson to save the day, and the charter lapsed. In a field nearby, not far from a public footpath, there is what is locally known as ‘the abandoned circus.’ This is less exciting then it sounds, a few neglected vehicles with various fairground items such as light rigging. There is nothing of value and nothing that works. Its mystery can probably be explained very easily by those in the know.

Contrary to speculation, ‘the abandoned circus’ is not the fairground’s legacy. Quite simply, it cannot possibly be the same because the showmen never rolled up with tigers and elephants (at least not in this village.) Such a misidentification would suggest the memories of Tollerton Fair are muddled. That really isn’t the case and with guidance those memories can be re-constructed with added understanding. In fact, the charter may have lapsed and the show may have stopped, but this is by no means a ‘finished’ history: the Hirst family are still in business, quite possibly putting up their dodgems in a village near you. In another corner of Yorkshire the show goes on.

← Charlotte, North Carolina and the ‘Meck Dec’
‘Coal not Dole’: Mansfield in the Miners Strike →